Four years ago, when a friend educated me about the whole elf on the shelf craze, I decided to give it a bash. A little house guest from the North Pole would be a simple and fun way to enhance the Christmas magic for my two young children, right?

Anticipating that my sensitive daughter would be freaked out by the official version, I opted for two merry little plush elves – one for each of my kids. Charlie and Christina arrived on the 1st of December in all their green and red glory and were an instant hit. I didn’t like the idea of the elves watching over the kids or that the kids couldn’t touch or cuddle them, so I scrapped those parts of the tradition.

Simple fun, I thought to myself in glee. Simple.

Four years on, this is what I would tell my naïve, pre-elf-on-the-shelf-self about life with our critters from the North Pole:

You will lose sleep over the elves

This year, the night before our friends arrived from the North Pole, my daughter woke up at 3am. She thought she heard them thumping around the living room and couldn’t contain her excitement. My son bounded into my room at 5am, screaming ‘can we see our elves now?’ as he jumped on my head.

We’ve had this 5am wakeup call ever since they arrived – it’s becoming ever so slightly tiresome.

You will lose the elves

I was snuggled under a blanket one evening, in a state of bliss as I watched Kirstie’s Handmade Christmas with a glass of wine, when something elf-related on the telly made me sit bolt upright. I hadn’t seen Christina all day.

My peaceful evening was exchanged with a frantic search for Christina.

‘We’ve lost one of the elves!’ I yelled at my unsuspecting husband, before wrenching him off the sofa.

‘Oh f**k,’ he sighed as we embarked on a thorough search of the house. Christina was eventually located in a Lightening McQueen pencil case which had been stuffed into a saucepan in the kitchen cupboard. Obviously.

You will lose yet more sleep because of the elves

At 2am one morning, I was just turning over in bed when an image of the elves flashed into my head. A cold finger of panic poked me in the stomach as I realised I forgot to move the little buggers. I jabbed my husband in the back and whispered, ‘We forgot to move the elves!’

‘Oh s**t,’ he mumbled, before rolling over and letting out a little snore.

Of course, it fell to me to creep downstairs in my dressing gown and locate the pesky things before thinking up a funny position to put them in, while my husband enjoyed his uninterrupted slumber. B***ard.

You will lose all enthusiasm for the elves

It was cute at first. The kids’ bright, joyful faces and the love they have for our impish visitors. But, by day twelve, the whole thing becomes a royal pain in the bum.

It doesn’t take me long to run out of elfin ideas and the fact we keep losing the blasted things is annoying to say the least. My husband suggested we make the elves write the kids a letter, saying they are awfully sorry but Santa has called them back to the North Pole on urgent business.

You will lie. A lot.

It was fine for the first couple of years, but when my eldest hit seven, tricky questions about the elves began to materialise. Why are all the shops selling them? Why don’t all children have them? Why don’t they ever get older?

I’ve wrapped myself in a complicated web of elf-related lies and I only have myself to blame. I can’t even remember most of the porkies I’ve proffered in relation to those elves. But my daughter, the eight-year-old elephant, remembers every word. One slip-up and the whole elf-on-the-shelf house of cards will come tumbling down around my ears.

This may not be such a bad thing

You’ll forget all the above next year

Next November, when the kids start shaking with excitement over the elves’ impending arrival, I’ll forget what a drag they are. Hell, I’ll probably look forward to the whole charade while I’m still in my fuzzy, pre-Christmas bubble. Elf amnesia is a thing, you know. I like to call it elfnesia.

How much trouble could two cuddly elves be anyway? 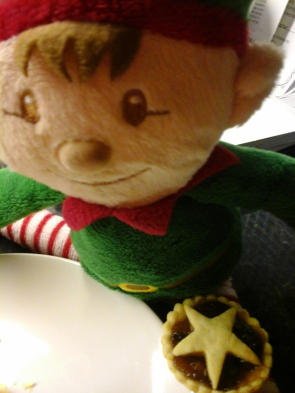 Aimee Foster is a mum, freelance writer and social media manager, bookworm and sea lover. Find more of her ramblings over on her blog, New Forest Mum.