During the thick of winter, when the days are short and temperatures have plummeted, it’s inevitable that energy bills will creep up. Two years ago, after receiving a worryingly high gas and electricity bill, I decided our family needed to make some drastic changes. Here’s how we reduced our energy bills by more than half. 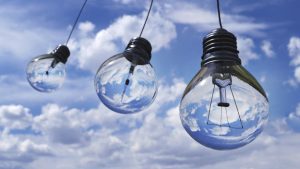 It may sound obvious, but I wasn’t aware just how much you could save by changing energy supplier. We had been plodding along with the same old supplier out of laziness more than anything. I thought switching would only lead to a few pounds saving and to be honest I couldn’t be bothered.

Until we had a problem with our supplier and switching became a matter or principal. I went on a comparison website and was amazed by how much I could save. We switched to the cheapest supplier and suddenly our electricity was half price and our gas cheaper by a third.

My advice is to check out comparison websites regularly and switch whenever you can get a better deal. There are even websites now that make the switch for you whenever they find a cheaper deal, although I haven’t tried this yet.

GET THE WHOLE FAMILY INVOLVED

In our house, if no one is watching the TV it goes off. Lights are turned off when nobody’s in the room. Care is taken with water use.

I’ve also taught my daughter, aged 7, to be careful with the energy she uses. For example, when she brushes her teeth she knows to turn the tap off. She also knows that if she leaves a room, she must turn the light off. It has helped that her topic at school this term was ‘Eco Champions’.

Sitting down together and making a plan on how to save energy as a family will greatly help to reduce those bills.

Not only is this good fire-safety practice, it will also save you pounds on your energy bill. If you leave your TV on standby, it’s still using 50 percent of its energy.

The same goes for washing machines, dishwashers, tumble dryers, microwaves, coffee machines etc. In our house, when they’re not in use, we turn them off at the wall and unplug them.

PUT A JUMPER ON

Most people wander around their houses in winter wearing a thin shirt with the thermostat cranked up to 20 degrees. Our first port of call is to put on more layers before the heating goes on.

Apparently turning down the thermostat by just one degree can save £85 per year.

Dare I suggest a onesie?! 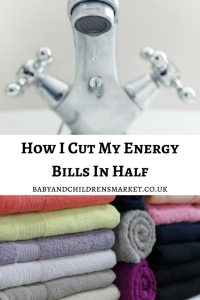 Before we moved house, I used to bath the kids every day and often separately for convenience. While one was at school I bathed the younger one because this made my life easier. However, in our new house, we were slapped with a water meter and the increase in cost was intense (triple what we had previously been paying without a meter).

I knew we had to do more to use less water. One way of doing this is to shower the kids instead of bath them. They didn’t like it at first but they’ve got used to it now. I give them a bath together once or twice per week when they have time to play in it. But even then, I only fill it as much as I need to.

We’ve become pretty energy savvy in our attempts to reduce the bills. There are plenty of ways to do this.

Make sure the dishwasher is full before you turn it on. The same goes for the washing machine. Don’t overload them but also take care not to use them until you have loaded them fully. Two loads of washing where one would suffice is just a waste of money.

Buy draught excluders and make sure all windows are shut before you switch the heating on. Close curtains to keep heat in. If you don’t use your fireplace, block the chimney with a pillow. Look into other ways of insulating your house such as loft and wall insulation to make it better able to keep heat in.

Use energy saving light bulbs. Fix dripping taps. Only fill the kettle with the exact amount of water you intend to use (did you know the kettle uses a lot of energy?) Turn down the washing machine temperature to 40 degrees and use the quick wash.

When you need to replace appliances such as washing machines and boilers, make sure you choose the most energy efficient ones as possible.

KEEP UP TO DATE WITH YOUR METER READINGS

Record your meter reading each month so you can see how you’re doing. Make sure you submit your readings to your energy supplier to avoid paying an estimated bill.

We had an estimated bill one month when I forgot to submit the readings and it was grossly inaccurate. I won’t be making that mistake again.

GET A SMART METER

All households will be offered a smart meter by 2020, at no extra cost. A smart meter not only sends meter readings to your energy supplier for you (ending the problem of inaccurate, estimated bills) but also allows you to see, in real time, exactly how much energy you’re using in pounds and pence. If you’ve ever tried to work out your energy bill, you’ll have seen how deliberately complicated it is. Smart meters put an end to all that.

You can find out more about smart meters here. Everyone will be offered a smart meter by 2020 but contact your supplier to see if you can get one now.

If you don’t want to wait until 2020 for your smart meter, you can buy an energy monitor for about £25 (although some suppliers give them away for free). An energy monitor is a handheld device, which allows you to see the amount and cost of the energy you’re using. This will then enable you to see where cutbacks can be made.

By following all of the above, our energy bills have reduced by more than half. For a family of four, this has made a huge difference to our wallet. The greatest saving came from switching supplier but all the other small, energy saving actions we take mount up.